We pass by regularly without thinking about them. The statues in Příbram have their own interesting stories to tell and often are famous drafts by well-known authors 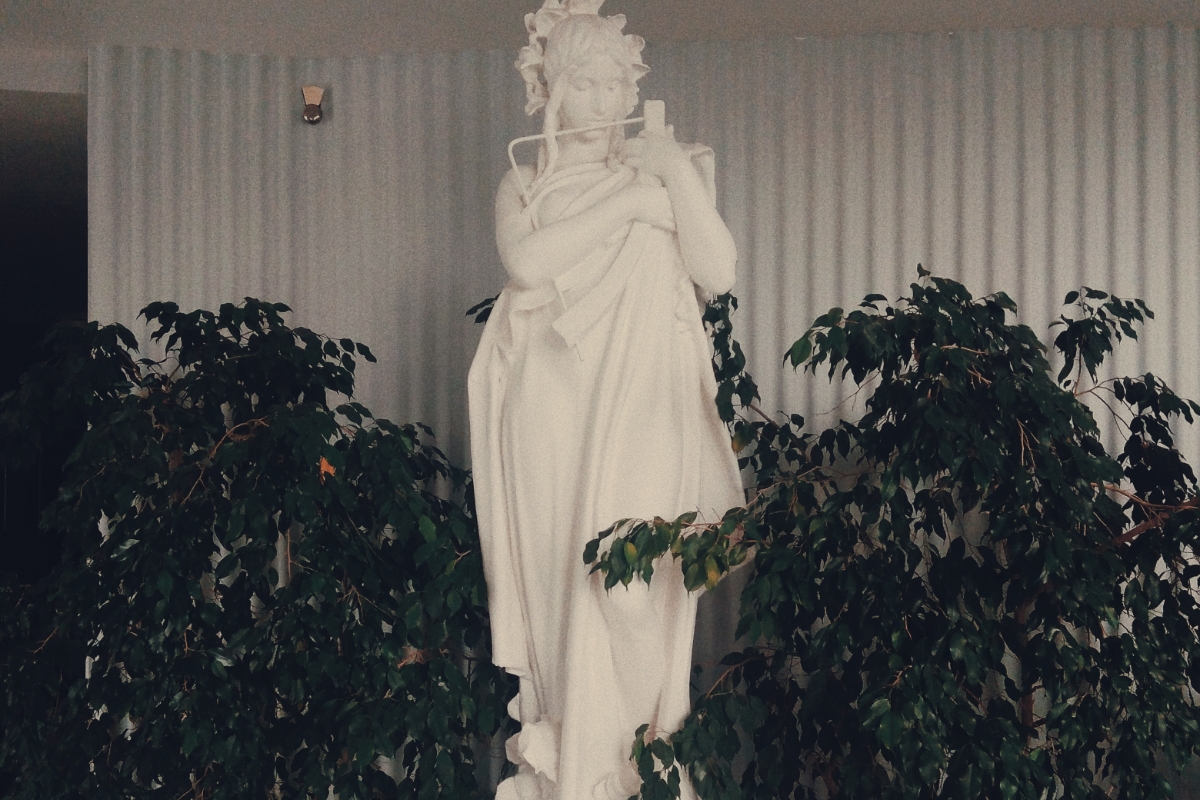 Josef Václav Myslbek long contemplated how to embody the motif of music in a statue. Although he started his work on this project in 1892, it took ten years of hard work and many sketches and studies of various visions and approaches to find the final concept. Over time, he considered the idea of the second sketch – a girl covered in drapery pressing a string instrument (“varyto”) to her heart and lips – the most appropriate for the topic.

Myslbek worked on the final version of his Music allegory until 1907. In 1913, the statue was cast in bronze and placed in the foyer of the National Theatre in Prague on 5 January 1914. The initial plaster cast is in the Příbram theatre. Unfortunately, we have no information about the timing or the circumstances of the arrival of this statue at the theatre.

An interesting figural stone relievo by Bedřich Stefan can be seen on the attic above the main entrance to the theatre. The three seated women are allegories of theatre, music and poetry. The woman sitting on the throne in the middle faces the front, holding two theatre masks (comedy and tragedy) in her hands. On the left, a female figure facing in the opposite direction to the central motif is sitting, accompanied by a swan and a column with Pegasus. The figure on the right is depicted with a fish (dolphin) and a lyre. Items associated with artistic creation, such as musical instruments, painter’s palettes and books are at the bottom. 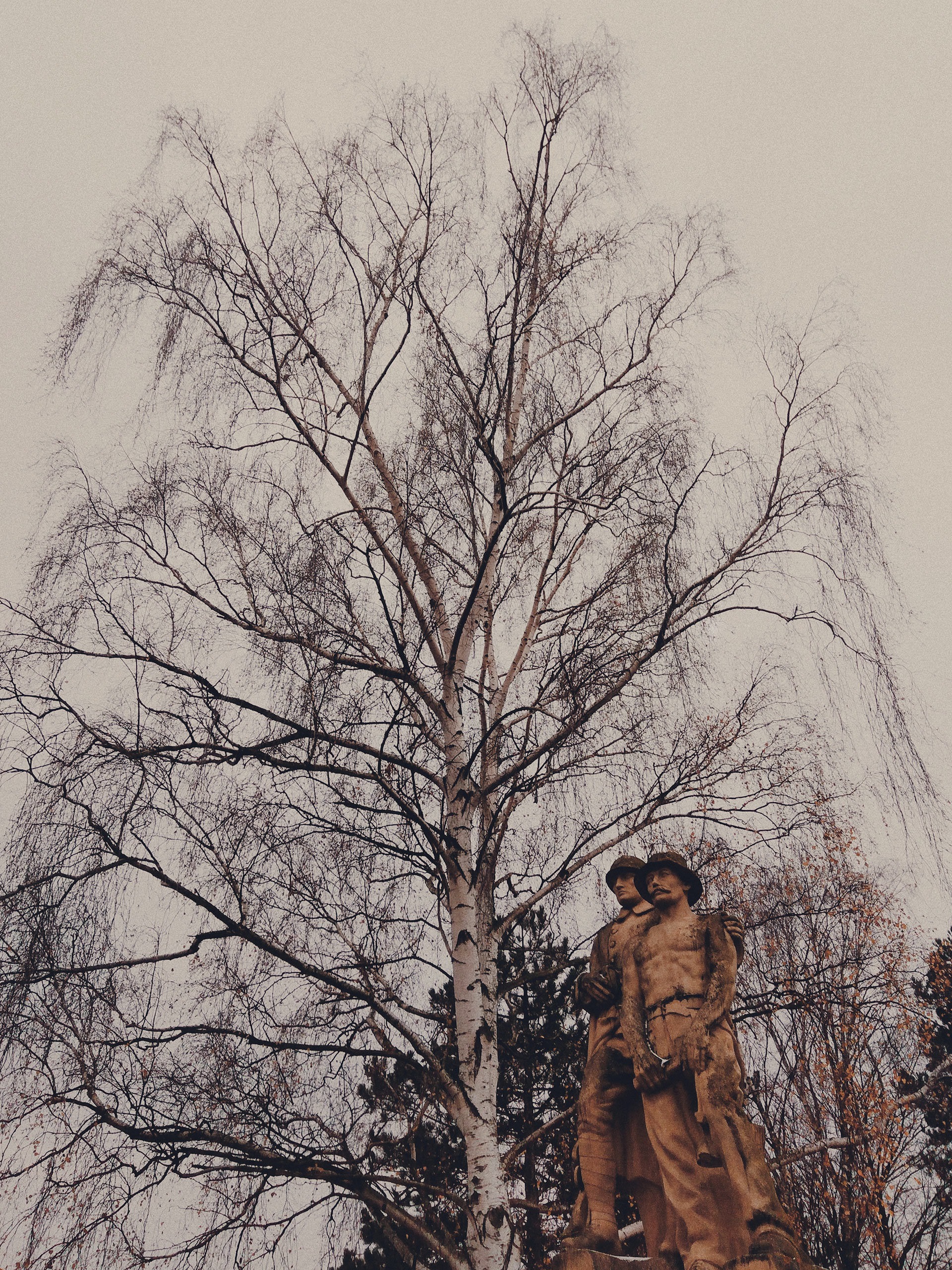 As the tenth anniversary of the establishment of the Czechoslovak Republic was approaching, memorials commemorating the fallen from World War I were constructed in many municipalities. Although Příbram strived to construct a memorial of this type already in 1917, the efforts were thwarted by financial and other problems and Březové Hory (back then still an independent municipality) was the first to construct this memorial. Václava Šára completed it in 1927. The memorial placed behind St. Prokop’s Church was unveiled on 6 July during Březové Hory Festivities. It reportedly attracted such great gathering that not all people could stand in the space before the memorial.

The festivities held from 3 to 10 July attended by locals and guests from different places in Czechoslovakia and abroad included exhibitions at both schools in Březové Hory. Václav Šára was among the exhibited local artists.

The memorial of fallen sons of Březové Hory is carved in sandstone from Hořice. Two larger-than-life figures stand on the pedestal – a French legionnaire and a miner with a hammer and lamp one step below. A nude stooped female figure with drapery in the middle of the pedestal is probably an allegory of the subjugated country. The placement of the memorial was subject to discussion from the start. Critics claimed that the memorial is outside the town, suggesting the area in front of the school in the upper square as a more appropriate location. The sculpture was finally moved to the lower Hynek Klička Square in 1959.

3.FOR THE WORK OF ALOIS JIRÁSEK (VÁCLAV ŠÁRA) 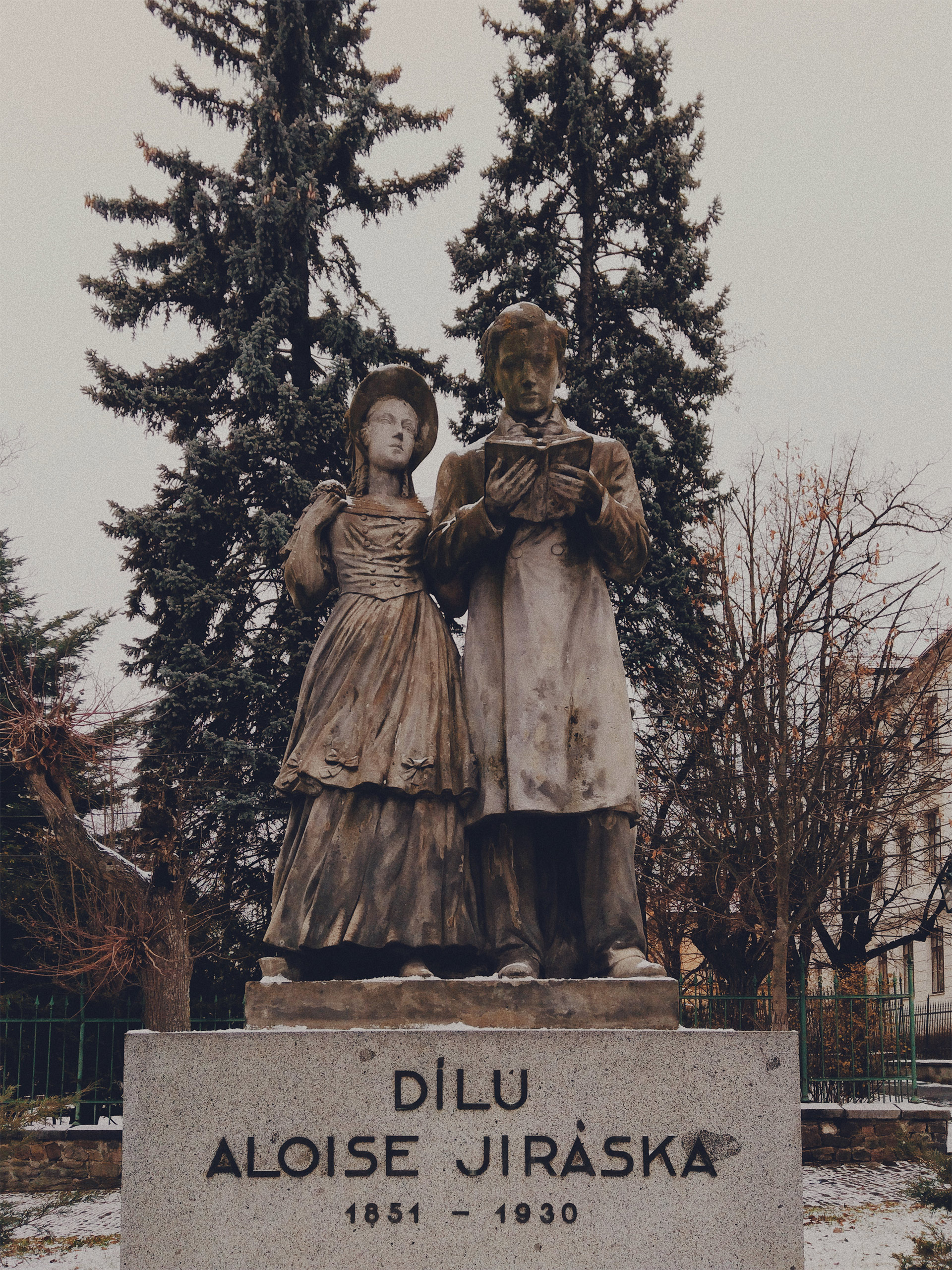 “It is not a bust or a statue of Alois Jirásek, rather a sculpture of two young souls in love, the same ones we read about in Jirásek’s Filosofská historie,” Horymír wrote. On Sunday 11 September 1938, the memorial for the work of Alois Jirásek was unveiled. The grand parade preceding the ceremony passed from the train station via Plzeňská street, the square and Pražská street to Jirásek Gardens. Jirásek’s daughter, Miloslava Pragerová also attended the ceremony.

The two students depicted in the memorial are Vavřena and Lenka, the main characters of Jirásek’s novel. The statue most probably depicts the scene where Vavřena declares his love for Lenka through Mácha’s poem Máj. The sandstone statue is 1.8 metre high and weighs 1.3 tons. Moving and placing the statue on the pedestal took four hours.

The construction of this memorial was initiated at the end of the 1920s by teachers at the schools in Příbram. Their plan was to build a respectable memorial to the writer and honourable citizen of the town of Příbram, Alois Jirásek on the occasion of the 20th anniversary of the establishment of the Czechoslovak Republic. Václav Šára was asked to create this statue.

Šára created the first model of the statue in 1930, and the association of Příbram teachers (as the initiator of the project) exhibited the model at the regional exhibition. The final version of the memorial only differs from the original model by Šára in minor details, for example Lenka has a different dress and hat. Her face also developed a little, as Šára reflected the features of his daughter Krista in Lenka’s face. The sculptor’s nephew František was the inspiration for Vavřena’s appearance 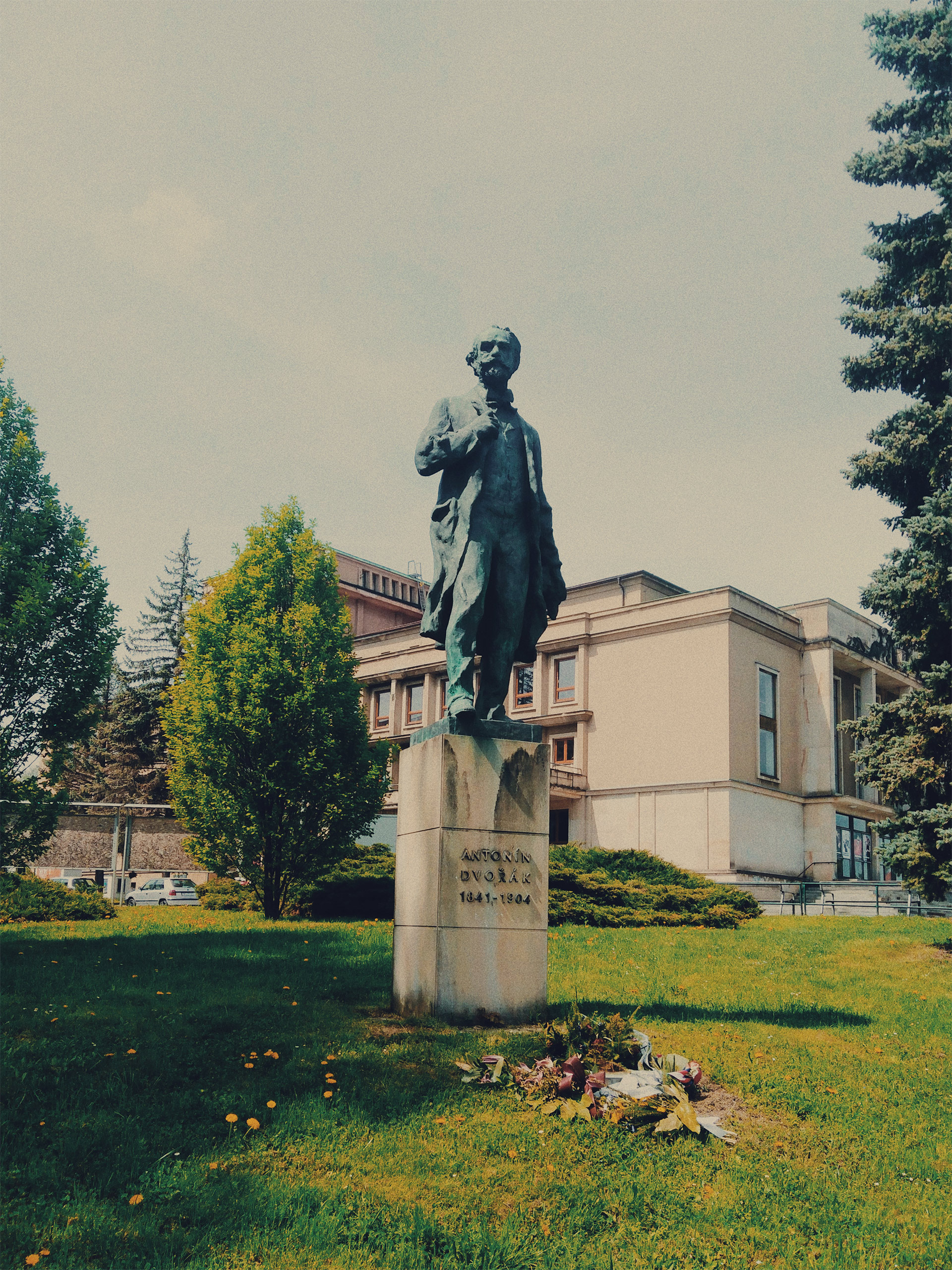 The monument of Antonín Dvořák in front of A. Dvořák Theatre in Příbram was unveiled on 3 May 2004 at the festive opening of the traditional Antonín Dvořák Music Festival. It is a cast of the three-metre statue that stands in front of Rudolfinum in Prague. The riverbank near Hořejší Obora – Dvořákovo nábřeží – also bears the composer’s name. The bust is the work of the major Czech sculptor Ladislav Šaloun, who created it for the pantheon of the National Theatre at the beginning of the 20th century. The monument in Příbram was unveiled in September 1929. 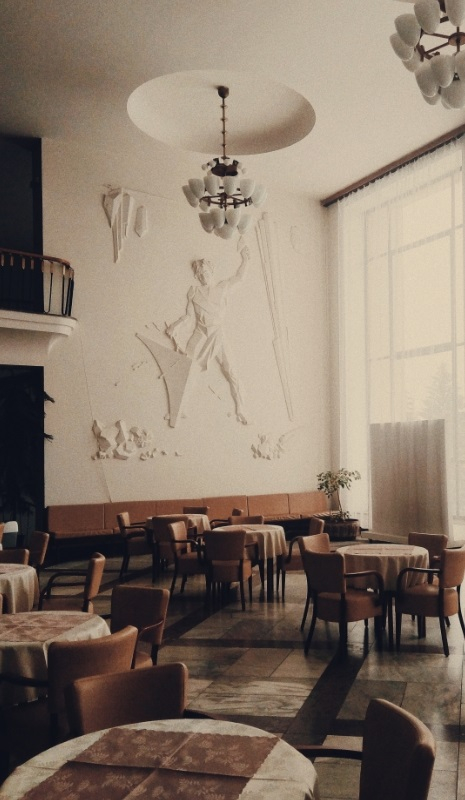 We end our journey once again in the Příbram theatre, this time in its foyer. Two monumental stucco relievos are displayed on the two opposite walls. The figure of the blacksmith working at his anvil in cubist style shapes is a dynamic display of strength, determination and effort. Unlike the first relievo, the figure of a muse on the opposite site is realistic. The muse is skipping, holding a violin and bow in her hands. Jan Lauda (1898–1959), a representative of the so-called social art and cofounder of the New Group is the author of both relievos. However, Lauda died shortly before completing the relievos and his son finished the work.